An Evening with Sisters

On Friday, I ventured to Hyde Park to see Ntzokae Shange and her sister and Chicago resident Ifa Bayeza. Bayeza’s newest play The Ballad of Emmet Till premiered at the Goodman Theater and Shange best known for her award-winning play turned book turned movie For Colored Girls Who Have Considered Suicide When the Rainbow Is Enuf. Together they co-wrote the book Some Sing Some Cry. Both amazing in their own right but together they are even more amazing. They are sisters and it shows. 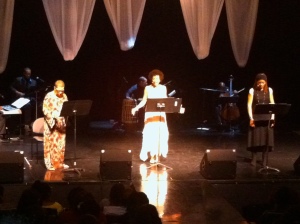 The DuSable Museum put on “a unique evening of words and music by celebrated authors and real-life sisters” But the part that stuck out the most for me was the sisterly displays of affection. Shange, not in the best of health walked out to the stage leaning on Bayeza for support.  Throughout the performance Bayeza could be seen glancing over to Shange to check on her.  At one point Shange had taken a seat and lost her place in the script this led to Bayeza looking over and softly  saying, “pss that’s your line.” Shange rustling through the pages found her spot and began to read only to be interrupted by Bayeza’s teasing shout of, “hey that’s my line!” This evoked fun-loving laughter from the audience. During the moments when Maggie Brown took center stage to sing, Ifa could be seen wrapping her arms lovingly around Shange and checking to see if she was holding up alright. 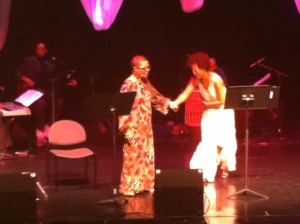 Seeing these two celebrated authors take the stage together was amazing but to see these two real-life sisters onstage was inspiring.